Hooray! It‚Äôs National Cupcake Week and to celebrate Cupcake Belle is sharing her favourite recipes from her Secret Recipe Book with you ‚Äď starting with these Triple Choc Chip delights ‚Äď¬†chocolate chip cupcakes topped with two-tone chocolate buttercream and a choc chip cookie! Here‚Äôs how to make them… 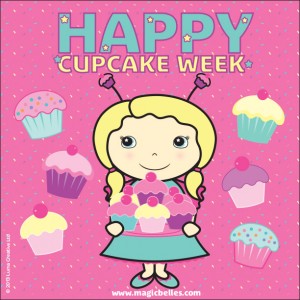 For the two-tone topping:

1. Heat your oven to gas mark 5/190¬ļC/375¬ļF and line a 12-hole muffin or cupcake tin with paper cupcake cases.
2. In a bowl, cream the butter and sugar until they look light and fluffy.
3. Add the beaten eggs and the vanilla extract and mix them in well.
4. Sift the flour into the bowl, gently fold it in, then stir in the chocolate chips.
5. If the mixture doesn‚Äôt drop easily off a spoon, add 1 tbsp milk to loosen it.
6. Spoon the mixture into the cupcake cases so that they‚Äôre two-thirds full.
7. Bake the cupcakes for 12 to 20 minutes until light golden brown, then leave them to cool for a bit before moving them to a cooling rack. Let them cool completely before decorating.
8. For the two-tone topping, sift the icing sugar into a bowl, add the softened butter and beat with a fork.
9. Add the water and mix well until the buttercream looks soft and fluffy.
10. Divide the buttercream between two bowls. Add 1 tsp vanilla extract to one bowl and mix it in well. Add 2 to 3 tbsp chocolate spread or Nutella to the second bowl and mix well, too.
11. Pop a star nozzle into a big piping bag and cut off the end of the bag. Spoon vanilla buttercream into one side of the bag and chocolate buttercream into the other side of the bag. Twist the end to secure it.
12. Pipe a two-tone swirl on each choc chip cupcake, then stud each swirl with more chocolate chips and top them with choc chip cookies!

We hope you enjoy these triple yummy cupcakes and don‚Äôt forget that National Cupcake Week supports a great cause ‚Äď Clic Sargent for Children with Cancer. Please make a donation if you can!